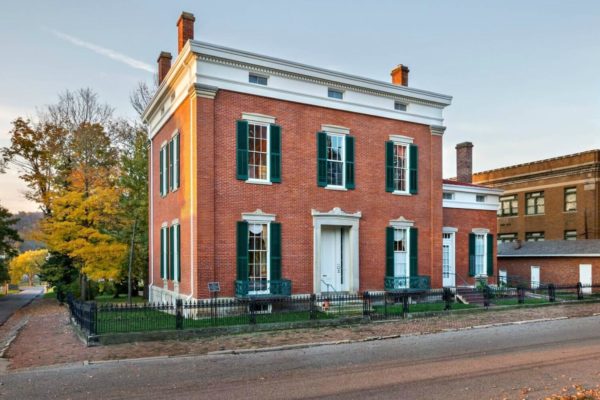 The Shrewsbury-Windle House is a National Historic Landmark at the heart of the nationally significant historic district of the booming 19th Century Ohio River community of Madison, IN. Built by local merchant Charles Shrewsbury between 1846-49 and designed by notable architect Francis Costigan, it is widely recognized as an outstanding example of the Greek Revival style. Its amazing circular stair is an admired feat of engineering and architectural grace.

Attracted by the home’s elegance and the community’s rich historic integrity, John and Ann Windle moved to Madison to purchase the house in 1948 and set about preserving its authenticity and character. In 1960, the couple founded Historic Madison, Inc. (HMI), an organization dedicated to preserving Madison’s substantial historic resources. At Ann Windle’s death in 2009, the house was bequeathed to HMI, along with an extensive 19th Century furniture and decorative arts collection.

After first preparing a preservation plan and undertaking some overdue exterior maintenance, HMI approached the Jeffris Family Foundation in 2012 and received a $14,000 grant covering half the cost of an Historic Structure Report to guide interior restoration to allow the house to serve as a house museum events center.

In 2014, HMI was invited to submit a proposal for a Capital Campaign Challenge Grant and was awarded $375,000 on condition they could raise an additional $750,000. That challenge was met by the end of 2015, and the restoration was completed in early 2018.

At the June 2018 Grand Rededication, Marsh Davis, President of Indiana Landmarks stated: “HMI has raised the bar and set new standards for restoring and re-visioning historic places through this outstanding restoration.”

The Jeffris Family Foundation is proud to have been a part of the preservation of such an outstanding piece of the Midwest’s architectural heritage.

All photos on this page © Susan Fleck.

Madison is a city in and the county seat of Jefferson County, Indiana, along the Ohio River. In 2016 the estimated population was 12,255. In 2006, the majority of Madison’s downtown area was designated the largest contiguous National Historic Landmark in the United States — 133 blocks of the downtown area is known as the Madison Historic Landmark District.

Your ticket for the: Shrewsbury-Windle House