About the Jeffris Family Foundation

The Jeffris Family Foundation was established in 1979 by Bruce and Eleanor Jeffris, and their son Tom.

Bruce Jeffris was born of a pioneer family that immigrated to Wisconsin from Kentucky in the 1840s. He joined the Parker Pen Company after World War I and retired as Chairman of the Board in 1960. 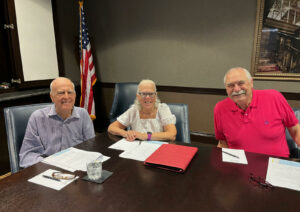 To preserve the cultural history and heritage of the Midwest through the preservation of regionally and nationally important historic buildings and decorative arts projects.

The Foundation supports significant projects that strive for high preservation standards and show a strong degree of local support.

I have witnessed many small organizations and local governments in Wisconsin that struggle to support and preserve historic buildings that have given their communities a sense of place. The Jeffris Family Foundation has a commitment to assist dedicated communities with funding opportunities designed to preserve their architectural heritage for future generations.
Tom Jeffris, President

Your ticket for: About