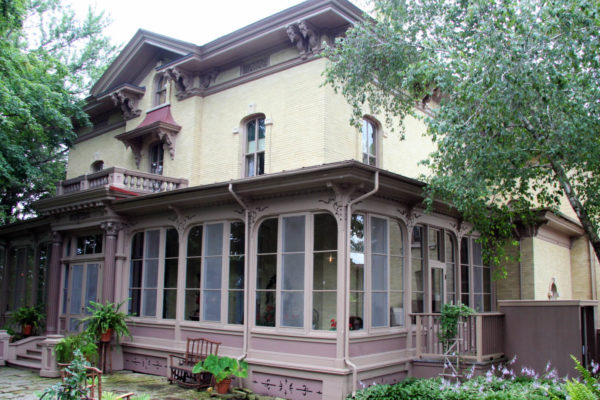 The Villa and estate are a historical museum operated by the Wisconsin Historical Society. The site has been restored to its appearance during the late 19th century, when it was the estate of the prominent H. Louis Dousman family.

Its vibrant hues and rich textures reflected the family’s rise to wealth and leisure living. Throughout its evolution the property was always considered an elegant and stylish Victorian country home, and much attention was paid to the grounds surrounding the mansion and outbuildings.

In 1885 the mansion was substantially remodeled and the house was redecorated in the style of the British Arts and Crafts Movement. This remodel included not only the house, but also the adjacent office. The remodeling was done by a Chicago designer from the William Morris Company of London.

In the 1990s, the discovery of numerous photographs of Villa Louis from the late 19th century allowed the historical society to undertake a major restoration of the mansion and surrounding buildings, with the help of multiple challenge grants from The Jeffris Family Foundation. Using the collection of photographs and the estate’s original furnishings, many of which were given to the site by the Dousman family heirs, the society was able to authentically restore the home to its appearance from 1893 to 1898.

The Wisconsin Historical Society hosts several events at Villa Louis, including a reenactment of the Battle of Prairie du Chien and the Villa Louis Carriage Classic, a major carriage driving competition held each September.

Prairie du Chien, the oldest Euro-American settlement established on the Upper Mississippi River, was a rendezvous point for early commerce and trade. The rich history of this second oldest town in Wisconsin is the focus of the PdC Main Street volunteers as they work to re-establish downtown as the social and economic heart of the community and promote the Downtown District. Nestled between bluffs and the Mississippi River, the Downtown District is a shopping, dining, lodging and entertainment destination for sightseers, recreationalists and regional residents. Architecture in the District reflects the history and dates back to the 1840s with many buildings restored to their unique charm and character.

Your ticket for the: Villa Louis