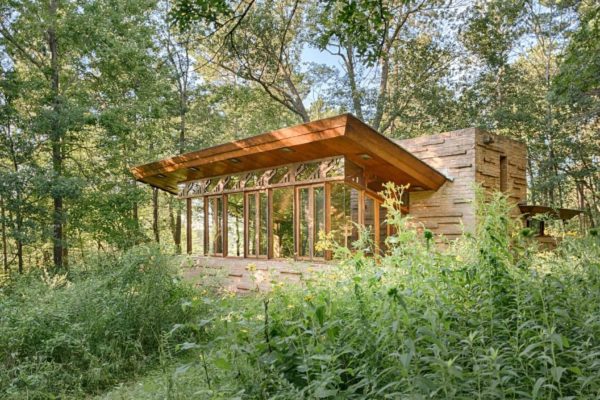 In 1958 Wisconsin resident Seth Peterson convinced Frank Lloyd Wright, who was then 90 years old, to design an 800 square foot cottage for him, on a steep wooded hill overlooking Mirror Lake. Framed by strong terrace buttresses of local Wisconsin sandstone, and with walls of the same stone, the building possesses a monumentality that is surprising to find in such a small structure.

The massive chimney and walls of the building, rising two stories over the bathroom and kitchen, are strong vertical elements that anchor and offset the energetic wedge of the roof. The great flying roof, seeming to hang in space without support, frames the principal views to the west and south. The flagstones used to pave the outside terrace continue inside as the cottage floor, manifesting Wright’s philosophy of making little distinction between the outside and inside worlds in which we live.

Inside the cottage, the soaring roof is offset by the lower stonewalled enclosure of the east side, a cozy retreat centered on the fireplace. In the bedroom a ribbon of narrow windows just beneath the roof provides a wash of light offering shelter and privacy. Peterson took his own life before the cottage was finished, and the next owners completed the work. Only one element of applied decoration marks this elegant and simple cottage: a frieze of stylized pine trees cut from plywood and set into a narrow row of windows above the main living room windows.

Mirror Lake State Park was established nearby in 1962, and in 1966 the property was acquired by the state and added to the park. Away from the developed areas of the park, however, the cottage was neglected and fell into disrepair.

In the late 1980s Audrey Laatsch, a local resident, noticed the run-down cabin while canoeing on Mirror Lake and became interested in the structure. Upon discovering its origin, she spearheaded a grassroots campaign among local residents and Wright-aficionados to restore the cottage. They founded a non-profit organization, the Seth Peterson Cottage Conservancy, in 1989.

Rehabilitation of the Seth Peterson Cottage took more than three years. With matching grants from the Jeffris Family Foundation, a $300,000, three-year restoration began, including elements from Wright’s original designs that had never been built. The work was finished in June 1992, the 125th anniversary of Wright’s birth.

Lake Delton is a village located on the Wisconsin River in Sauk County, Wisconsin. The population was 2,914 at the 2010 census, making it the largest community in the Wisconsin Dells area.

Your ticket for: Seth Peterson Cottage