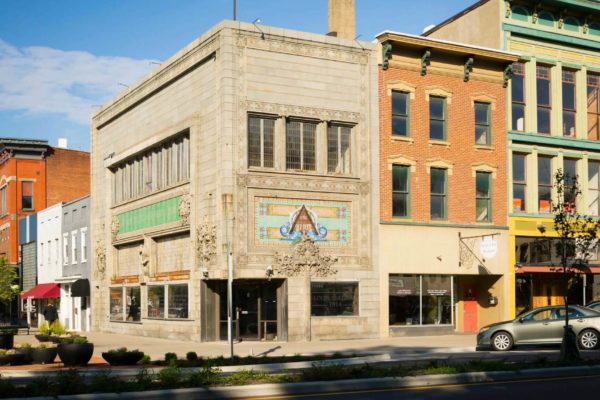 The bank was designed by noted Chicago architect Louis Sullivan. It was one of three banks designed by Sullivan in 1914, the other two being in Grinnell, Iowa and in West Lafayette, Indiana. For this project the architect was given a narrow lot but made the building larger by making it two stories high, something that he did not typically do in his banks.

The color scheme chosen here deviates from his normal red-brown brick tapestry surface. Instead the building is covered with gray-green terracotta slabs that are edged with typical Sullivanesque border designs. The ornamentation included a winged lion quite similar to the ones to be found in Cedar Rapids, Grinnell and Sidney. Little mention is made in the literature about Sullivan as to why these creatures populate his banks. Also unusual is the fact that Sullivan includes his name in the tile mosaic over the front door.

It was added to the National Register of Historic Places on July 2, 1973. The building was gifted to the Licking County Foundation in December 2013.

The Licking County Foundation, with a matching grant from the Jeffris Family Foundation,will restore the building, and when the renovation is complete, Explore Licking County, the area’s convention and visitors bureau, will move into the space.

Newark is a city in and the county seat of Licking County, Ohio, located 33 miles east of Columbus, at the junction of the forks of the Licking River. The estimated population was 49,423 at the 2017 census, which makes it the 20th largest city in Ohio.

Your ticket for: Louis Sullivan Bank