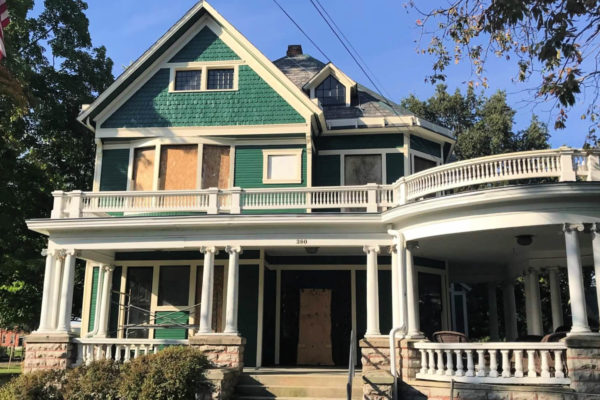 The Harding Home is a historic house museum at 380 Mount Vernon Avenue in Marion, Ohio. It was the residence of Warren G. Harding, 29th president of the United States. Harding and his future wife, Florence, designed the Queen Anne Style house in 1890, a year before their marriage. They were married there and lived there for 30 years before his election to the presidency.

Like James A. Garfield, an earlier U.S. president from Ohio, Harding conducted his election campaign mainly from the house’s expansive front porch. During the three-month front porch campaign, over 600,000 people traveled to the Harding Home to listen to Warren speak. George Christian (Warren’s next door neighbor and Press Secretary) allowed his home to be used as Republican Headquarters for the campaign. In 1920, Harding built a small bungalow-style structure behind the Christian House so newspaper reporters had workspace to type their stories.

The Harding Home is surrounded by an expansive, elaborately detailed porch. Entry to the house is through a reception hall, with a parlor on the left. A dining room and Harding’s office are also in the first floor. There are four bedrooms on the second floor and a bathroom. Built-in closets in three of the bedrooms are an unusual feature for the time.

The restored house contains almost all original furnishings owned by President Harding and his wife. The adjacent press house, by 2020, will feature information about the reporters who worked there in 1920, as well as the relationship of the reporters to Harding and their importance to the campaign. The collection at the Harding Home is over 5,000 original artifacts that belonged to Warren and Florence Harding.

On April 12, 2016 Harding 2020, a collaboration between Ohio History Connection, the Harding Home, and Marion Technical College, detailed plans to spend $7.3 million at the site to establish the Warren G. Harding Presidential Center.

With a matching grant from the Wisconsin-based Jeffris Family Foundation, one-third of the personal residence cost ($435,000) is supplied by the Foundation, with the Ohio History Connection raising the remaining two-thirds. Restoration of the home and its grounds will return the project to its 1920 appearance.

The culmination of the work is to coincide with the 100th anniversary of Harding’s election to the presidency.

Marion is a city in and the county seat of Marion County, Ohio. The municipality is located in north-central Ohio, approximately 50 miles north of Columbus. President Warren G. Harding, a former owner of the Marion Star, was a resident of Marion for much of his adult life. The city and its development were closely related to industrialist Edward Huber and his extensive business interests. The city is home to several historic properties, some listed on the National Register of Historic Places.

Your ticket for the: Warren G. Harding Home