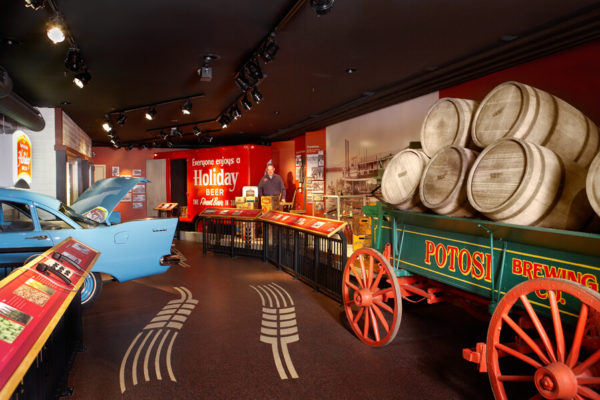 Beer began being brewed in the Potosi Brewery building in 1852 by Gabriel Hail and John Albrecht. In 1886, the building was bought by Adam Schumacher.

The Potosi Brewing Company was officially founded by Schumacher and his brothers, Nicholas and Henry, in 1906. In 1972, the brewery ceased operations. Gary David purchased the building in 1995.

In January of 2001 the original Potosi Brewery building was generously donated by its owners to the Potosi Foundation, a 501(c)(3) non-profit organization. Following an exhaustive restoration process, the foundation reopened the brewery in 2008.

As sole owner of The Potosi Brewing Company, The Potosi Foundation’s mission is to spur economic opportunity in and around Potosi, brew only the finest craft beer and to channel all profits into its markets served to support historical and educational initiatives and other charitable causes.

Since then, it has been restored with a generous matching grant from the Jeffris Family Foundation.

In 2004, it was chosen as the site of the National Brewery Museum by the American Breweriana Association.

The site also features the Potosi Brewing Company Transportation Museum, with historic vehicles and displays about the area transportation of beer to customers.

The village of Potosi is located in southwest Wisconsin, situated on the Great River Road along the Mississippi River bordering Iowa and Illinois. Beautiful bluffs and hills, trees, wildlife, birds and the winding Mississippi, along with the mining history, add to the character and charm. Potosi was first named Snake Hollow and remained as such until 1839 when three towns: Lafayette, Van Buren, and Osceola consolidated. English miners, German and Irish settlers came to the area to mine the lead and iron ore in the area. This area was the largest settlement in western Wisconsin in the mid 1800’s.

Your ticket for: Potosi Brewery