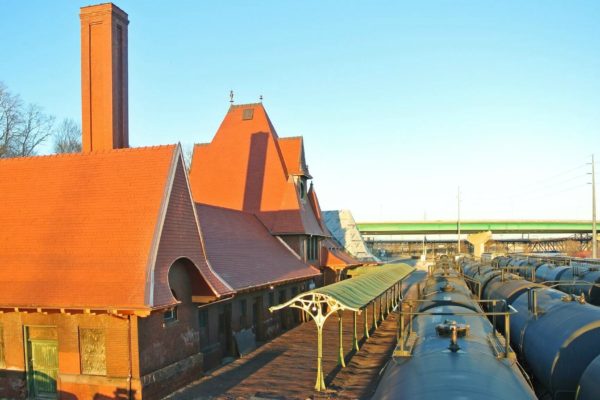 In 2011 the City of Keokuk, Iowa, acquired the Keokuk Union Depot from Pioneer Railcorp for the purpose of historic preservation and community use and leased the associated real estate for 99 years. Erected in 1891, the building was designed by the Chicago architectural firm Burnham and Root. It is notable as one of John Root’s last designs for public buildings in his distinctive Romanesque Revival style. Thereafter, with Root’s death in 1891, architectural design in North America took a different turn.

Architectural features of the Depot include Root’s characteristic use of earth tones, arched windows and high-pitched roofline; the interior features an oak-paneled waiting room and octagonal ticket booth.

In 2011 an intern from the School of the Art Institute of Chicago developed an architectural study that resulted in the Depot’s being listed in the National Register of Historic Places. Restoric LLC, a Chicago firm specializing in the restoration of historic structures, completed a thorough architectural study in 2014 and produced a 180-page Historic Structure Report.

The plans drawn up from the Historic Structure Report form the basis for returning the Depot as closely as possible to its 1891 appearance, including replacing the shingled roof with clay tiles and rebuilding the central peaked tower, which was leveled off around 1950. The goal is to restore the building while adapting it to serve the community in a manner consistent with both historic preservation standards and contemporary requirements for public use.

The Keokuk Union Depot Commission, appointed by the Mayor, administers the preservation project as part of Keokuk’s larger Riverfront Development Master Plan. No municipal tax funds are to be used for Depot projects. A separate Keokuk Union Depot Foundation, a tax-exempt charitable organization, was established in 2012 to raise the necessary funds from grants and private sources.

In 2014 the Keokuk Union Depot Foundation launched a Capital Campaign upon securing a one-third matching grant of $333,000 from the Jeffris Family Foundation toward the projected $1 million-plus cost of restoring the roof. Substantial grants for specific phases of the project from the Iowa Historical Resource Development Program (HDRP) were also instrumental in accelerating the pace of the project by enabling work on the building’s eaves and reconstruction of the apex. Grants by local foundations and community groups have contributed to the effort, but a large segment of support has come from individuals who share the vision for preservation of this community resource.

By the Depot’s 125th anniversary in July 2016 the attainment of the funding goal was assured and work on restoring the central tower and tile roof commenced. Major roof restoration work was contracted and was substantially complete by the end of 2017. Smaller projects have been undertaken by a corps of local volunteers.

View a letter from the Keokuk Union Depot Foundation

Keokuk, the Geode Capital of the World, is located in southeast Iowa along the Mississippi River. Keokuk is 15 miles southwest of Nauvoo, Illinois, and 65 miles north of Hannibal, Missouri, the boyhood home of Mark Twain.

Your ticket for: Keokuk Union Depot