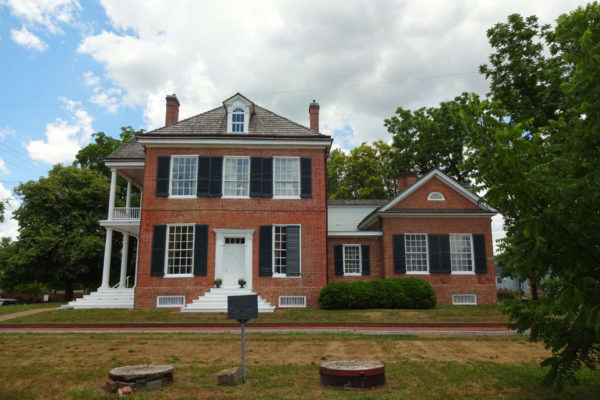 The mansion was completed in 1804 and reportedly dubbed “Grouseland” by William Henry Harrison due to an abundance of grouse in the area. Also called the “White House of the West”, it was built on a knoll overlooking the Wabash River near a walnut grove.

Grouseland occupies an important place in American history as several treaties with Native Americans were signed in the Council Chamber. Grouseland was designed by the architect William Lindsay and constructed at great personal expense to Governor Harrison.

Built in the frontier village of Vincennes, Grouseland was a palatial mansion in its day, built in part to give credibility to the rather young Governor. The project was daunting at the time, as the territory had no established roads. Nevertheless, Grouseland was built from local materials by skilled labor, and decorated in grand style with items imported from Europe.

Grouseland served Harrison’s position and marked his place in American aristocracy—William Henry was the youngest son of Benjamin Harrison, V, a signer of The Declaration of Independence.

During Harrison’s governorship of the Indiana Territory, Grouseland was the focal point of the social and official life of the territory. As the capital of the Northwest Territory, more territory was governed from Vincennes than any city outside Washington, D.C. Grouseland was home to Harrison until 1812. It remained in the Harrison family until the late 1840s.

The mansion includes the council chamber where Harrison met with representatives from various American Indian tribes. In 1805, Harrison negotiated the Treaty of Grouseland with a number of important Indian leaders, including Little Turtle and Buckongahelas. Harrison had two confrontations with the Shawnee leader Tecumseh at Grouseland in 1810 and 1811 (see Tecumseh’s War). Harrison’s thirteen treaties with Native American leaders resulted in millions of acres of land being acquired by the United States.

Today, Grouseland is owned by the Daughters of the American Revolution who saved the building from destruction. It is overseen by the Grouseland Foundation, a volunteer board of directors composed of DAR and non-DAR members to manage the structure and programs. The main campus of Vincennes University is adjacent to the property, and other state historic buildings, such as the Territorial Capitol building, have been moved to the property. It is located in the Vincennes Historic District.

With a matching grant of $400,000 from the Jeffris Family Foundation, after the Grouseland Preservationists raised $800,000, major interior improvements are being made, including stabilizing the grand staircase, mechanical work, and decorative arts improvements throughout the mansion.

Vincennes is a city in and the county seat of Knox County, Indiana, United States. It is located on the lower Wabash River in the southwestern part of the state, nearly halfway between Evansville and Terre Haute. Founded in 1732 by French fur traders, notably François-Marie Bissot, Sieur de Vincennes, for whom the Fort was named, Vincennes is the oldest continually inhabited European settlement in Indiana and one of the oldest settlements west of the Appalachians.

Your ticket for: Grouseland Mansion & Museum