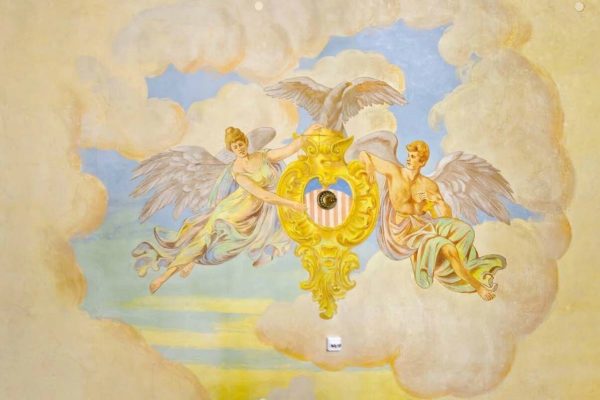 The Grant County Courthouse is in Elbow Lake, Minnesota, the county seat of Grant County, and listed on the National Register of Historic Places.

After a lengthy political and legal battle to secure the county seat for their developing community in the late 19th Century, the citizens of Elbow Lake were prepared to make their new county courthouse a showpiece of community pride in 1905, so they commissioned Minneapolis architects to create a Beaux Arts style, and then they graced its interiors with a series of handsome murals depicting county scenes and symbolic figures in key rooms and the central dome, all executed by noted regional artist Odin J. Oyen. But over the years art gave way to modernizations and many murals were lost, faded, and forgotten.

When Grant County commissioners undertook a $4.5 million general rehabilitation of the courthouse in 2011-12, the removal of suspended ceilings revealed the murals once again, including a 25’x30’ mural depicting “Justice and Power of Law” crowning the main courtroom. The discoveries motivated the County to launch an effort to restore all of Oyen’s work in the courthouse.

They commissioned two different decorative arts analyses to recommend appropriate conservation and restoration treatments and, with that study in hand, approached the Jeffris Family Foundation and in 2013. They were awarded a 2:1 challenge grant of $90,000 of the cost of a $333,000 conservation and restoration effort. That challenge was met in 2014 with a grant from the Minnesota Legacy Fund. Restoration means the citizens of this west central Minnesota rural county can take full pride in their iconic courthouse – arts and all.

The photo gallery below shows before and after photos of some of the murals.

Elbow Lake is a city in, and the county seat of, Grant County, Minnesota. The population was 1,176 at the 2010 census.