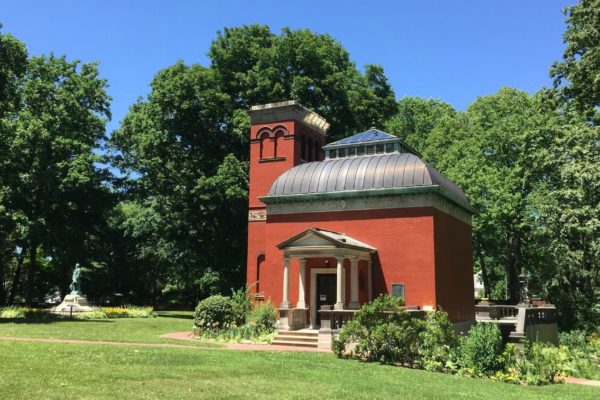 Before authoring the best selling novel “Ben Hur, A Tale of the Christ” in 1880, Lew Wallace had a successful military career as a Union General during and after the Civil War. His retirement years spent writing afforded him the opportunity in 1895-98 to build his “pleasure house for my soul” in a garden setting near his home. There he pursued his many interests, including history, art, inventions, music, and serious scholarship in classical cultures.

Upon his death in 1905, the Studio was opened to the public for tours and in 1941 was acquired by a local group and donated to the City of Crawfordsville. In 1976 the site was declared a National Historic Landmark. In 1997 the City created the non-profit Lew Wallace Study Preservation Society to preserve and operate the site.

Over the years the exterior of the unique neo-classical gem had been faithfully preserved, but its interior decoration had been lost to misguided improvements and over-painting of decorative arts that originally graced the dome and walls. But archival sources had cited the effect of decorative vignettes, so in 2011 the Society applied for $9,000 from the Jeffris Heartland Fund to support half the cost of an historic structures report.

That report, completed in 2012, exposed small windows of the original work to discover a far more elaborate and intact decorative scheme than had been anticipated and it recommended appropriate conservation techniques, along with restoration of the original lighting, to reestablish the building’s glory. In 2012 the Society was invited to propose a Capital Campaign Challenge Grant and was awarded $100,000, on condition they raise $200,000 within three years. When that challenge was met in 2014, they began work, completing the project in 2015 and reopening to the public with much fanfare and acclaim.

The Jeffris Family Foundation is pleased to have partnered with many supporters throughout that local area to restore the interior décor of the Lew Wallace Studio to its original state.

Crawfordsville is the county seat of Montgomery County, Indiana and is home to over 15,000 residents. The City has consistently appeared in the top 100 Best Small Towns in America. In 1832, Wabash College, an all-male liberal arts college was founded in Crawfordsville. Today Crawfordsville is still rich with history and the friendly mid-western life.

Your ticket for the: Gen. Lew Wallace Study and Museum