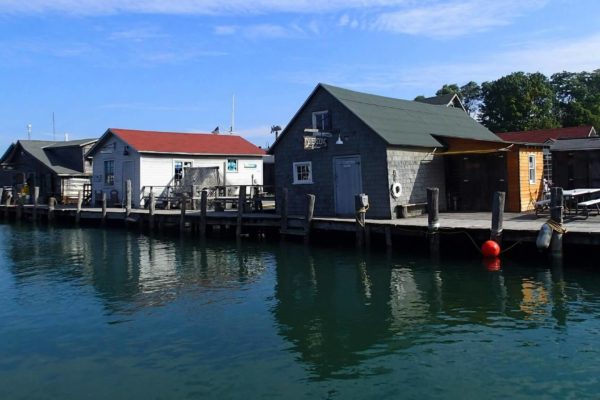 The Leland River connects Lake Leelanau with Lake Michigan, and the short expanse between its 12-foot waterfall and the mouth of the river serves as a natural harbor. Long called Carp River by locals, the river was rapidly employed by early settlers in the 19th century as a commercial fishing port.

A small working waterfront soon developed, comprised of wood docks and shanties, fishing craft and processing. The area evolved over 150 years, but by the mid 20th Century modern pleasure craft were battling for berths, and commercial fishing was waning. In 1968 a new marina constructed just to the north of the river’s mouth superseded the role of the traditional waterfront.

But with great foresight a local fish processor had begun to consolidate ownership of the docks and shanties to preserve their unique character. Over forty years he maintained the essential character of the site, leasing out some buildings to small seasonal retailers as the site grew as a tourist destination in its own regard. In 2001 the Carlson family founded the Fishtown Preservation Society as a commercial fishing advocacy organization. In 2005 the organization’s mission expanded to include the preservation of the site itself. In 2007 the society acquired the entire unique property and two historic commercial fishing vessels, their licenses, and equipment.

In 2009, Fishtown Preservation Society was awarded a Jeffris Heartland Fund planning grant to prepare a Historic Structure Report to guide appropriate restoration and stewardship of a resource whose very character has been defined in part by constant evolution. That report, completed in 2010, then served as the basis for an invitation to apply to the Jeffris Family Foundation for a Capital Campaign Challenge Grant of $119,000, awarded on condition that they raise a 2:1 match of $238,000 to meet their campaign goal of $357,000 by 2013. Their success assured the long term preservation of the site which today remains a working waterfront and tourist destination for a growing visitorship.

The Jeffris Family Foundation is pleased to have helped preserve an important element of our maritime history and one of a dwindling number of historic working waterfronts on the Great Lakes.

Leland is a picturesque, coastal small town located on a sliver of land between Lake Michigan and Lake Leelanau on Michigan’s Leelanau Peninsula, surrounded by incredible natural beauty, excellent amenities and charm.

Your ticket for: Fishtown