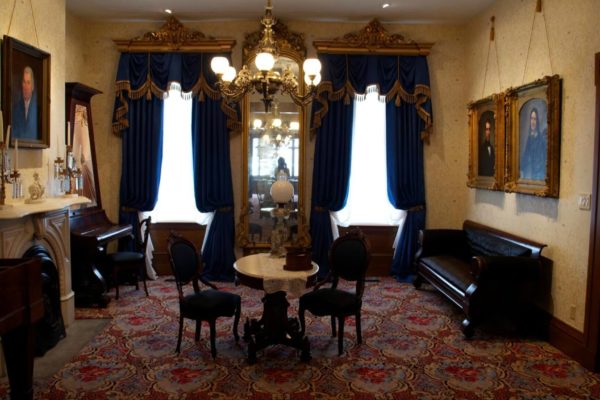 Edwards Place is the home of the Springfield Art Association, a longstanding community visual art education organization in Illinois’ capital city. But it is also the oldest home in Springfield, built in 1833 by Thomas Houghan. In 1843 it was purchased by Benjamin Edwards, a prominent local attorney and youngest son of the Territorial Governor Ninian Edwards. In 1857 The Edwards family remodeled the modest vernacular cottage into a fashionable and grand Italianate home. The house served as the family’s home until 1909. During that period it hosted numerous national political figures, including Stephen Douglas, Ulysses S. Grant, and Abraham Lincoln.

In 1913, Edward’s daughter Alice gave the house to the emergent Springfield Art Association (SAA) with the directive that it be used to educate the people of Springfield in the visual arts. The house was used for classes and gallery space until the 1960s when modern art studios were added on site. As part of a larger vision planned for the organization’s centennial, SAA decided to restore the house to its 1857 appearance and use it as an historic House museum interpreting life and times of pre-Civil War Springfield and an arts related event center.

To advance that strategy in 2009, SAA asked the Jeffris Family Foundation to consider a grant of $20,000 to support half of the cost of an interior finishes analysis to guide their restoration work. That study was completed in 2010 but sat on a shelf until other parts of their major capital plan could be assembled.

When they were ready in 2012, they were invited to submit a proposal for a one-third capital campaign challenge grant of $150,000 if they could secure $300,000 from other sources exclusively for work on the house.

The Jeffris Family Foundation is pleased to have been a sustaining development partner for this important historic site that today is the hub of a vital local art and history scene.

The SAA a community based, non-profit organization that promotes and supports the visual arts, provides art education opportunities for the greater Springfield, IL, area, and preserves and interprets historic Edwards Place and the collections of the SAA.

Your ticket for: Edwards Place