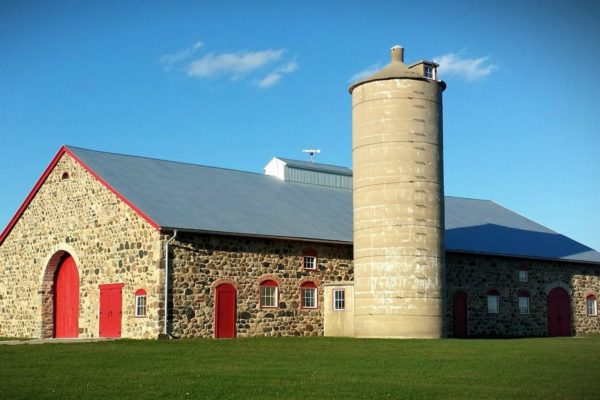 The Daniel E. Krause Stone Barn (also known as the Chase Stone Barn), is a historic barn in the town of Chase in Oconto County, Wisconsin.

Designed by farmer Daniel E. Krause and built by stonemason William Mensenkamp, the barn has become renowned for its historical significance. Built of fieldstone, but in a unique fashion: Its walls are more thoroughly stonework than most stone barns, and its massive arch entrances are large enough to permit the passage of large hay wagons through both ends. As of 2010, it is one of two remaining barns in Wisconsin to be constructed from fieldstone.

Seventeen years after its erection, the barn and the rest of its farm were sold by the Krause family in 1920. It had eleven owners between Krause’s retirement in 1920 and 1954. During the mid-1950s, the property was purchased by two brothers, who operated the farm into the 21st century and oversaw significant repair work in the 1990s. By this time, the barn had experienced gradual structural deterioration, as well as tornado damage. Efforts were made in 1995 to refurbish and strengthen the barn, adding concrete and beams to shore up the structure.

Working with the Jeffris Family Foundation, local preservationists have concentrated on ensuring the survival of this significant local landmark. Achieving the matching grant from The Foundation, the community was able to convert the barn and barnyard into a park, the stable area into an agriculture museum with displays on farming techniques and farm equipment from around 1900, plus a stone bridge over a creek, a stone walk path, and a historic general store.

Chase, Wisconsin, is a rural community with wide open spaces. It features a mixture of farms, residential homes, a few commercial businesses, and exceptional schools. The total population in 2017 was approximately 3,134.

Your ticket for: Chase Stone Barn