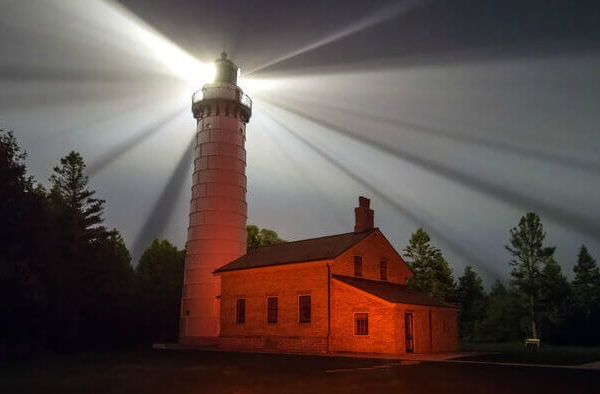 The Cana Island Lighthouse, operated by the Door County Maritime Museum, has been nestled on the shore of Lake Michigan for more than 140 years. This 89-foot-tall light tower on an 8.7-acre island, includes the original home of the lighthouse keeper and his family, and the oil house where fuel for the light was stored.

The highlight of any Cana Island visit is climbing the 97 steps of the tower’s spiral staircase to reach the gallery deck. The outside deck delivers a sweeping view of Lake Michigan and the Door County peninsula.

Currently used as an active navigational aid under the jurisdiction of the United States Coast Guard and a museum, it was added to the National Register of Historic Places in 1976. This lighthouse, along with the Baileys Harbor Range Lights, was built to replace the Baileys Harbor Lighthouse in 1869, and was first lit in 1870.

The keepers quarters, privy, and tower were the first buildings and were made of cream city brick, but the brick of the tower deteriorated quickly because of storms and icy winters. In 1902, a steel cladding was added to the tower to protect it from further deterioration. The cost of the quarters, tower and cladding was $12,792.55.

The light itself is a third order Fresnel lens that was made in France. It used to be fueled by lard, later it was fueled by kerosene, then by acetylene, and now by electricity. The round ball at the top is the vent that removed the smoke and soot from the oil lamp. Each night oil had to be carried to the top of the tower by the keeper or his assistant to keep the light fueled.

When the light first became electric in 1945, it was by an engine driven, 2 kW generator, and batteries that powered the 100 watt, 32 volt bulb. A powerline was finally installed in the 1960s, and the bulb was switched to a 110 volt, 200 watt bulb. Four bulbs are mounted in a rack that allows for the next bulb to light if the one before it burns out.

An octagon-shaped oil house, storage building and privy are also located at the site. An oil tank had been in the woods to the south of the building and a pipe underground moved the oil to the building.

The lighthouse is located on Cana Island, which is connected to the mainland via a rocky channel. Depending on the lake level the pathway can be covered with 1–2 feet of Lake Michigan water

The tower is 89 feet tall. The light is approximately 85 feet above the water level, and has a visual range of 17 nautical miles . The tower is 4 feet 8 inches thick at the base, with the outer layer 24 inches thick, with a 20-inch air space between it and the 12-inch inner layer of brick at the base. There are 102 cast iron steps in the circular staircase leading to the watch room.

On Oct. 15, 1880, a terrible storm called the Alpena Gale destroyed seven ships near this lighthouse, and on Oct. 12, 1928, the freighter M.J. Bartelme went aground in the fog at this location after attempts to free the ship failed.

Major restoration of the Cana Island Lighthouse was made possible through a matching grant from the Jeffris Family Foundation. The lighthouse and keeper’s quarters are open to tour by the Door County Maritime Museum.

Cana Island is an island in Lake Michigan in Door County, Wisconsin, and is home to the Cana Island Lighthouse. Cana Island is connected to the mainland by a causeway. The island is part of the Town of Baileys Harbor.

Your ticket for: Cana Island Lighthouse