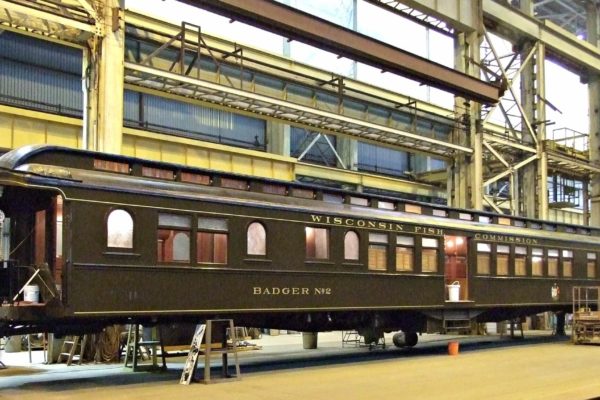 The Pullman Company built this wooden car for the Wisconsin Fish Commission as “Badger #2” in September 1913.

It was designed with a steel underframe and fitted with steel tanks to carry fish to remote locations around the state to restock streams and rivers. The car would be stopped on a bridge and the tanks emptied into the water below.

In 1960, the car was the very first to be purchased by Mid-Continent. It was moved to Hillsboro, Wisconsin in 1962 to carry passengers for the first operating season, and then on to North Freedom in 1963.

#104 (or simply the “Fish Car”), as it is known to museum members, served as a regular coach in service to haul passengers on the museum’s line for many years, wearing several colorful paint schemes along the way. It was last used during Snow Train 1985.

A $950,000 full restoration to bring the car back to its as-built configuration complete with fish storage tanks was completed in 2008. The restoration is made possible by a $475,000 Jeffris Family Foundation Challenge Grant, and matching funds from hundreds of contributors.

Your ticket for: Badger II