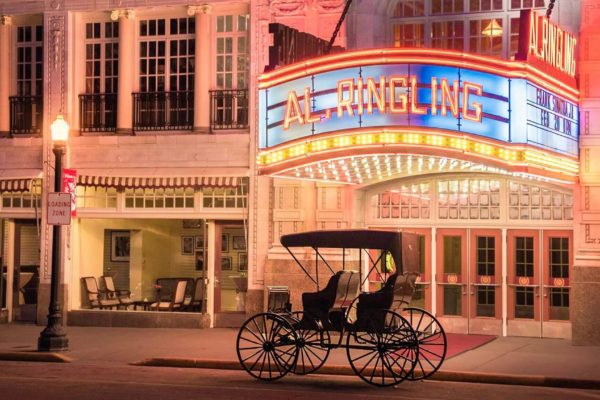 The Al. Ringling Theatre in Baraboo, Wisconsin, first raised its curtains on November 1915 and has been operating continuously ever since.

Designed by the architectural firm Rapp and Rapp, it was funded by Albert Ringling, one of the famous Ringling Brothers Circus Entrepreneurs, for $100,000. The theatre has featured performances from vaudeville and silent movies, to grand opera starring such notables as Lionel Barrymore and Mary Pickford.

The design of the theater is based on the Orpheum Theatre, built by Rapp and Rapp in Champaign, Illinois in 1914. The decor of the auditorium is said to have derived from Ange-Jacques Gabriel’s opera house of 1763-1770 in the Palace of Versailles but some also believe it may have been based on Victor Louis’s 1780 Grand Théâtre de Bordeaux.

Originally the theater had a Style 1 Wurlitzer theater pipe organ, and then a 9 rank, 3 manual Barton with a “circus wagon” style console.

After 100 years, this beautifully restored theatre is a live performance, music and film venue. Created with the intention of providing Baraboo with a multi-purpose entertainment facility, the Al. Ringling Friends purchased the historic theatre in 1989. Today, ART Friends carries on the Al. Ringling legacy, striving to develop the facility as a premier cultural center offering diverse local, regional and national cultural programs.

The most recent restoration began with the aid of the Jeffris Family Foundation’s Capital Campaign Challenge Grants match program, with work starting in June 2015 and completed in February 2016. Work done includes heating and air conditioning, electrical, plumbing, restoration of the inside the of the hall, box seating area, gallery lounge, and Ladies Retiring Room.

Baraboo, Wisconsin, is a thriving community of approximately 12,000 residents located in Sauk County. It is a family-oriented community with an excellent school system and a wide variety of businesses in a city that still holds that small town charm.

Your ticket for: Al. Ringling Theatre